Good Friday is a special day in the church calendar when we focus on the hours leading up to Jesus death on a cross outside Jerusalem around 2000 years ago. A helpful way churches do this is by looking at seven passages of scripture describing that day and what Jesus said, the seven last words of Jesus. These are deep and emotive words from the most significant day in world history.

To help us reflect more deeply on these words and their significance artist and church member Rebekah Steele has created seven works of art that express how these words of Jesus impact her. We hope that these images and reflections are able to guide your worship this Easter season. 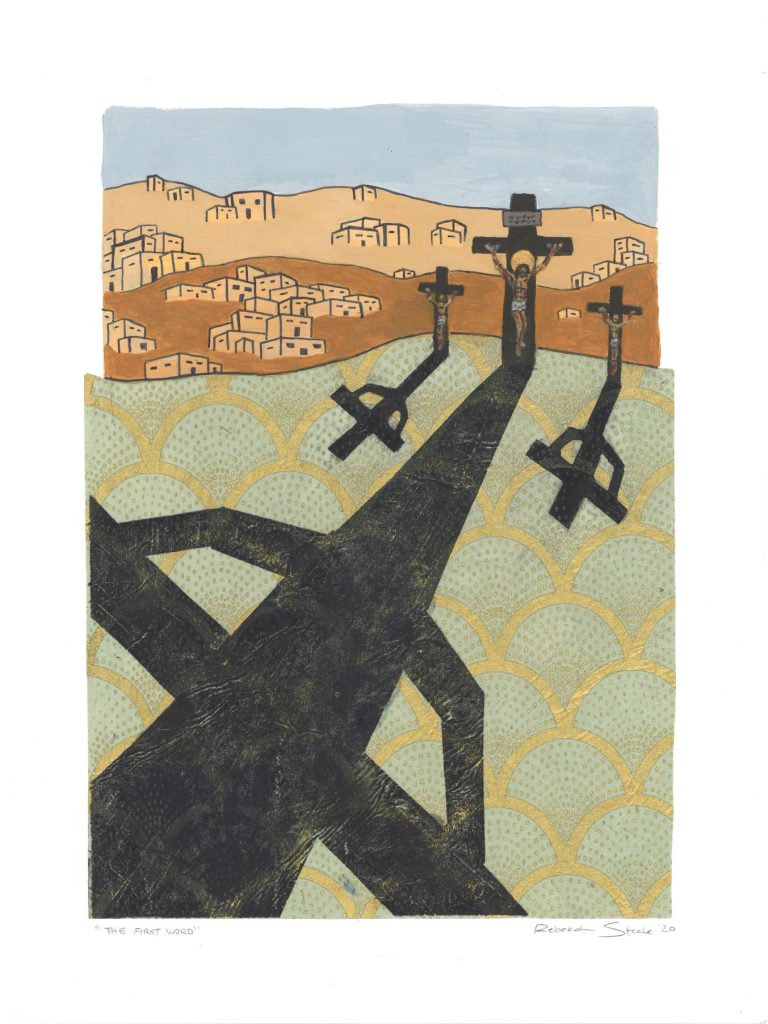 Luke 23:33-34 When they came to the place which is called The Skull, there they crucified him, along with the criminals, one on his right and one on his left.  And Jesus said, “Father, forgive them, for they know not what they do.”

This first word sets the scene by describing Jesus crucified between two criminals, outside of the city at the place called The Skull.  The most striking element in this image is the large looming shadow of the cross.  The shadow reaches out to the edges of the page, offering forgiveness to all, both to those historically in this scene and to every person today.  All of us have sin that needs to be paid for, represented by the two smaller cross-shadows, and while our sin is great, the grace and mercy extended to us through the cross is even greater.  The shadow of the cross is so large it is able to engulf all of our sin, to swallow it up, and give us the forgiveness extended to us here.  All are able to receive that forgiveness if they choose to live “in the shadow of the cross.” 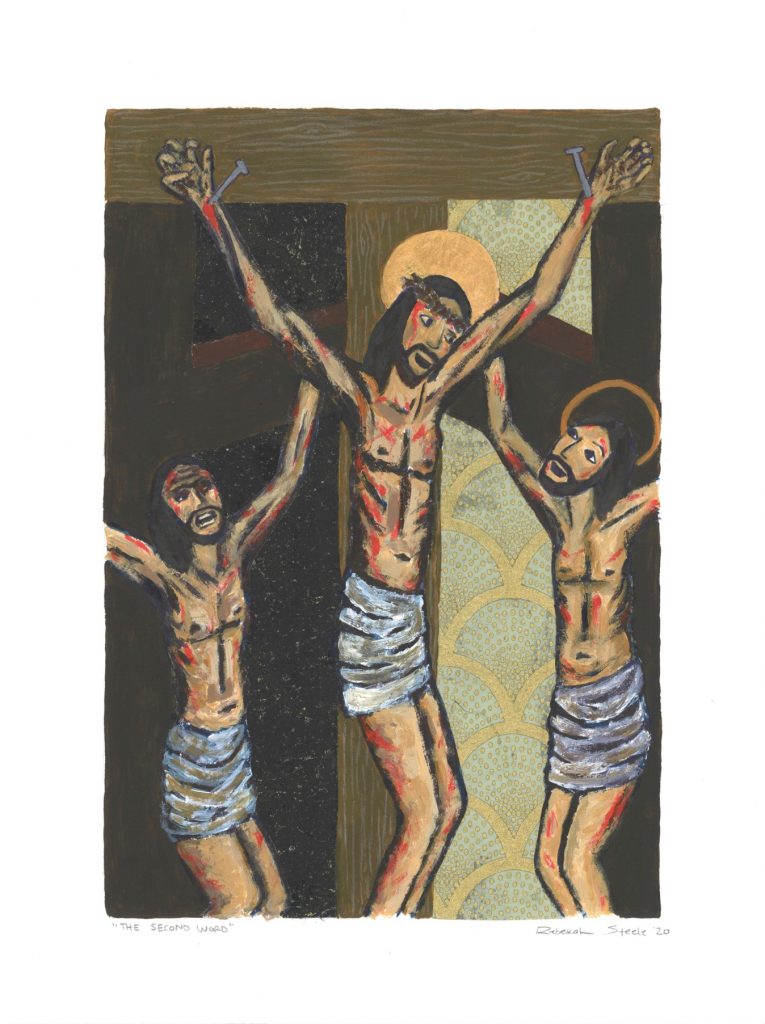 Luke 23:39-43 One of the criminals who were hanged railed at him, saying “Are you the Christ? Save yourself and us!” But the other rebuked him, saying, “Do you not fear God, since you are under the same sentence of condemnation: And we are punished justly; for we are receiving the due reward of our deeds, but this man has done nothing wrong.”  And he said, “Jesus, remember me when you come into your kingdom.”  And he said to him, “Truly I say to you, today you will be with me in Paradise.”

Here we see two very distinct reactions to Jesus, the two reactions that we see over and over again expressed in the characters of the gospels.  We see the one criminal full of anger, bitterness and skepticism; even his mind is darkened.  This criminal is living in darkness. The green and gold paper is the same on both sides, but the paper on the left has been covered over by layers of dark paint printed on top of it, darkening his world.

But then there is the other criminal.  He is full of humility, knowing that he has done wrong and is being punished justly, yet believing with such child-like faith.  His face is filled with hope as he is granted forgiveness and eternal life in that moment.   The face of Jesus is filled with love and joy.  Despite his suffering, represented by the agonizing position of his hand, he is loving others and extending grace to them with such joy.  Jesus has a full halo around his head, showing his immense, yet hidden glory even on the cross, and all those who believe get to partake of that glory and become “little Christs,” represented by the thin halo around the head of the now-forgiven criminal.

Sometimes meaning comes as the art is made, unintentionally but joyfully accepted.  In this work, there just happened to be crosses that formed on the chests of the three bodies as they were simply painted. The mark of the cross is on all of us, built into the way we were created, and the sign is even on Jesus who entered our humanity.  We all have a cross.  We can respond to Jesus’ cross with joy and delight, or we can carry our own cross in darkness. 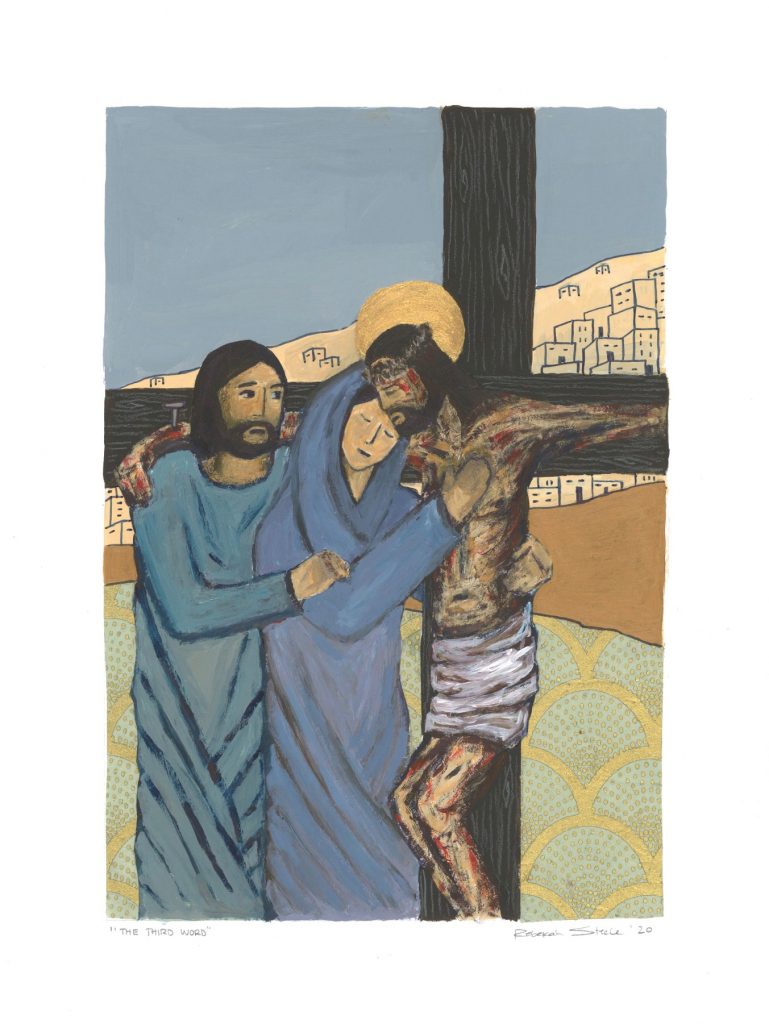 This scene is so intimate, so caring, so loving.  Jesus is on the cross in agony and searing pain, but even in that pain he is once again caring about the needs of others.  Here he honors and cares for his mother by providing for her future and fulfilling both the fifth commandment and his role as the firstborn son.  It is also in this scene that family is redefined, no longer only a flesh and blood relation, but anyone believing in Jesus becoming part of the family of God (Matthew 12:46-50).

While Mary and John were not physically with Jesus up on the cross, the intimacy and love expressed in this moment was best represented by bringing them up to Jesus where they are able to embrace one last time.  The love between them is represented through their expressions and the connection of Jesus’ hand on John’s shoulder, John’s hand on Mary’s arm, and Mary’s hand on Jesus’ chest.  We also must be willing to join Jesus at the cross and embrace him as our Lord, Savior, and brother, the firstborn of all of God’s children. 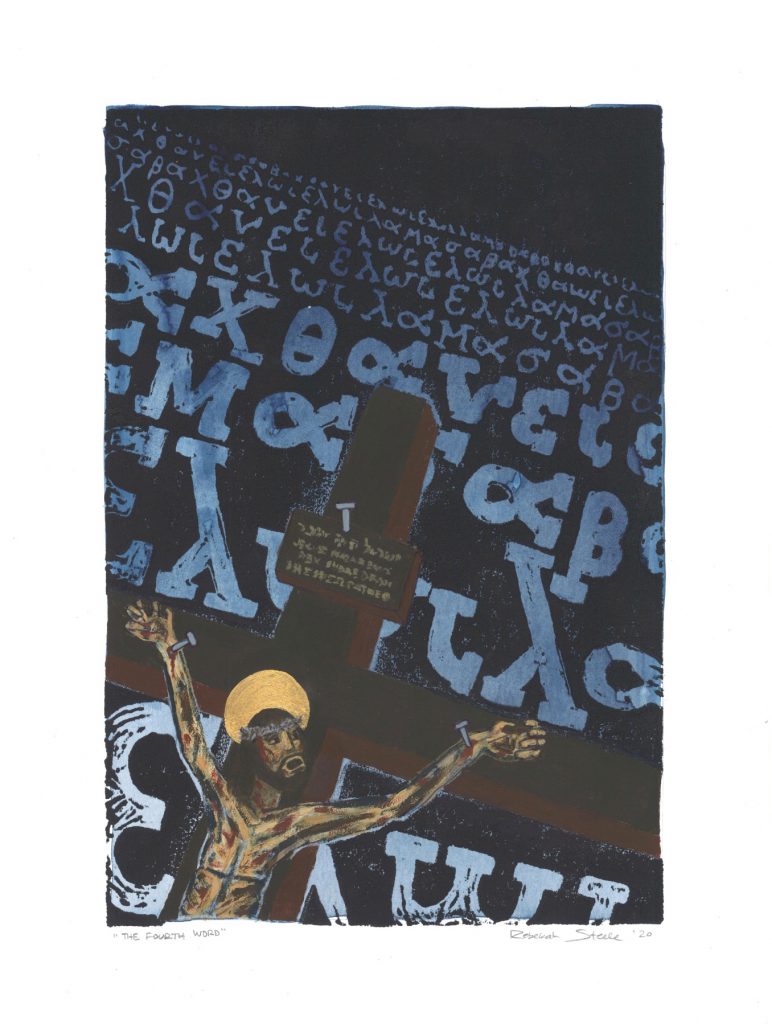 Mark 15:33-34  Now from the sixth hour there was darkness over all the land until the ninth hour.  And about the ninth hour Jesus cried with a loud voice, “Eli, Eli, lama sabachthani?” that is, “My God, my God, why have you forsaken me?”

In this word, darkness comes over the land.  It is the ninth hour, the hour of the evening sacrifice.  Jesus, in agony both physically (as seen by the hands and facial expression) and spiritually, calls out to God, “My God, my God, why have you forsaken me?”, referencing Psalm 22.   These Aramaic words, translated into the Greek language look like this: ελωι ελωι λεμα σαβαχθανι.  These are the words, shouted in a loud voice, that echo into the darkness, getting softer and softer, eventually dissipating into the empty darkness, into silence.  There is no response. 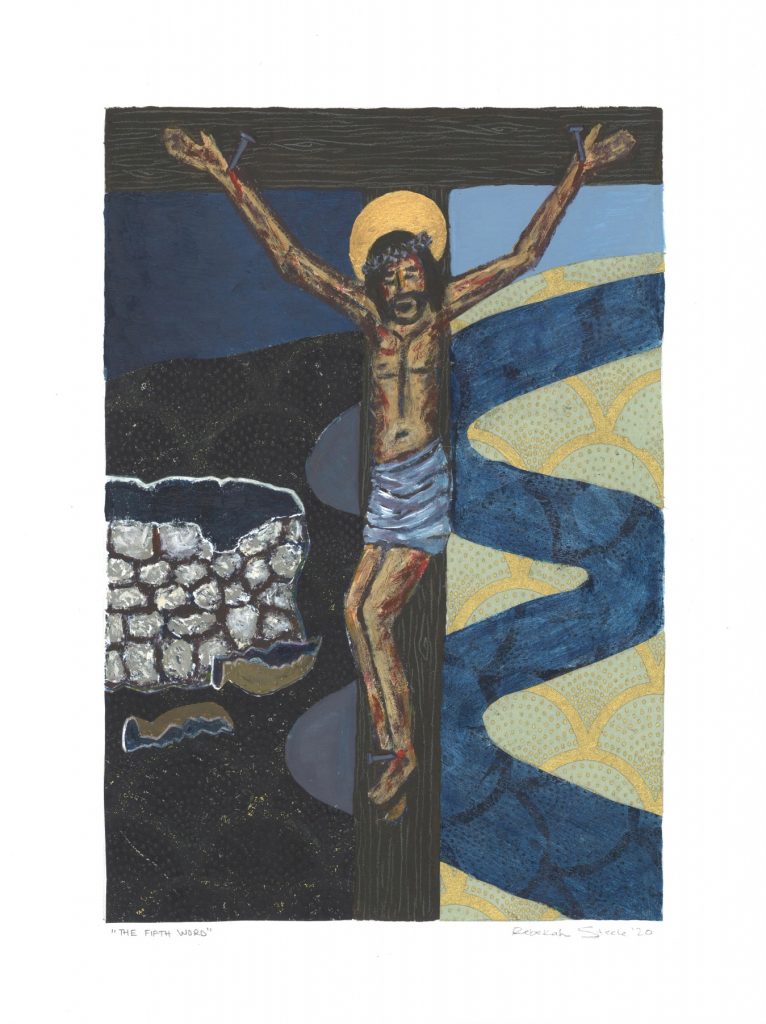 John 19:28  After this Jesus, knowing that all was now accomplished, to fulfill the scripture said, “I thirst.”

Jesus, the source of living water, thirsts on the cross in our place so that we never have to thirst again (see John 4:1-26 and 7:37-39).  His body is turned toward the darkness, toward the broken and empty cistern and vessel that can hold no water (Jeremiah 2:13) and toward the dried-up riverbed.  We are usually the ones who thirst, who try to find fulfillment and satisfaction in the broken, temporary, stagnant things of this world.  Here Jesus thirsts in our place so that we can access forever his streams of abundant living water!

The blue sky in this picture seemed so dissonant with the rest of the picture that artistically, I had a great urge to paint it a different color or shade, but I kept feeling a resistance, feeling that it is supposed to be that color.  It doesn’t fit this hard and dark scene, but it is this very scene that makes it possible for us to have “blue-sky days”.  It is like a window that beckons us to the stream of living water, for it is only through Jesus that we can have hope, joy, and fulfillment both now and forever. 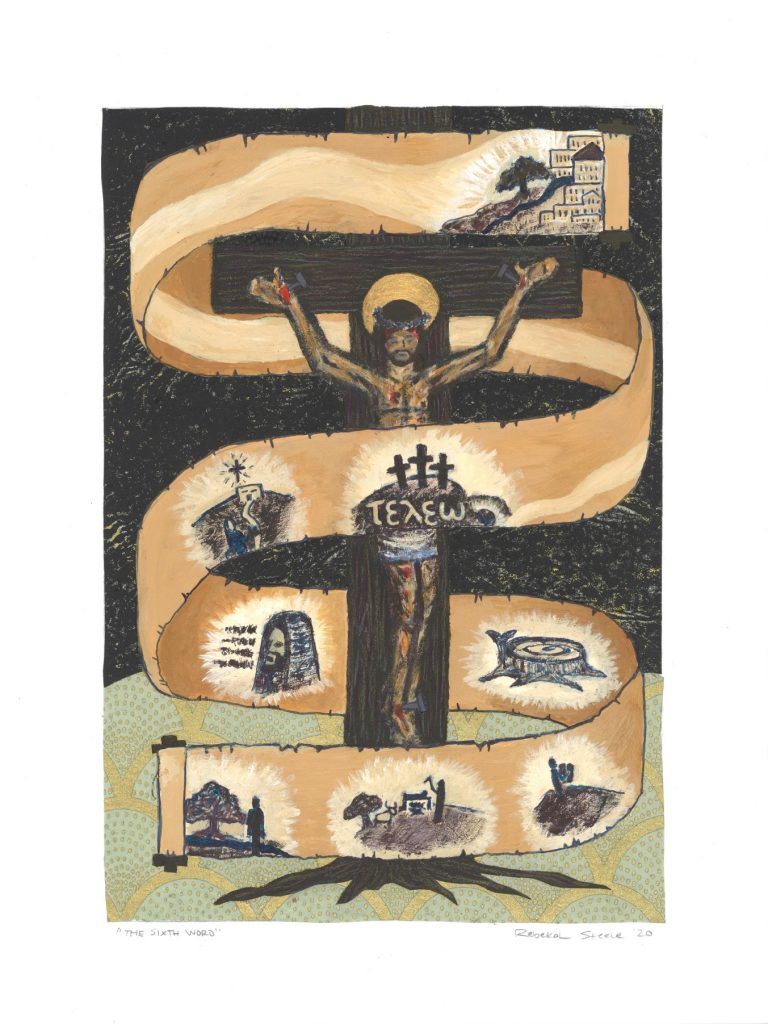 John 19:29-30  A jar of wine vinegar was there, so they soaked a sponge in it, put the sponge on a stalk of hyssop plant, and lifted it to Jesus’ lips.  When Jesus had received the vinegar, he said, “It is finished”; and he bowed his head and gave up his spirit.

“It is finished.”  How much meaning is in those three simple words.  Jesus had finished everything he came to do.  He is the second Adam, who instead of saying “My will be done” said “Thy will be done” and lived a perfect sinless life.  He is the ram, caught in the thicket, who is sacrificed in the place of Isaac, in our place, a foreshadowing of this very event (Genesis 22).  He is Moses, delivering us from the slavery of sin and not only obeying the law, but fulfilling it.  He is from the line of David, a shoot from the stump of Jesse (Isaiah 11:1), the King of all kings.  He fulfilled every word that the prophets spoke about him.  He was born of a virgin (Isaiah 7:14), in Bethlehem (Micah 5:2), and in this very act he fulfills the words of the prophets and his own words that he will die and rise again on the third day.

Each of these people and prophecies is a burst of light, a revelation and unveiling of the plan that God had from the very beginning, culminating in Jesus (Luke 24:44). Every Old Testament character, law and prophecy is fulfilled in Jesus, and his death and resurrection opens up the path which leads to the new creation!  This revelation is no longer a series of short bursts, but a steady stream growing and expanding through the work of the Spirit as all of creation is being redeemed.

Note also the theme of trees throughout the Scriptures – from the tree in the garden of Eden, to the ram caught in the thicket, to the shoot from the stump of Jesse, to the tree of the cross, leading to the tree of life in the new creation which will bring healing to the nations!  Note also the mounts… Isaac led up a mountain to be sacrificed (the wood upon his back, just like the cross on the back of Jesus!), the law of Moses received on Mt. Sinai, and the hill called Calvary.   How perfectly and purposefully God’s Word is written, guiding the whole of redemptive history to its culmination in the new creation!

τετέλεσται!  It is finished!  (From the Greek root word τελέω).  Jesus fulfills all of Scripture and salvation has been won! 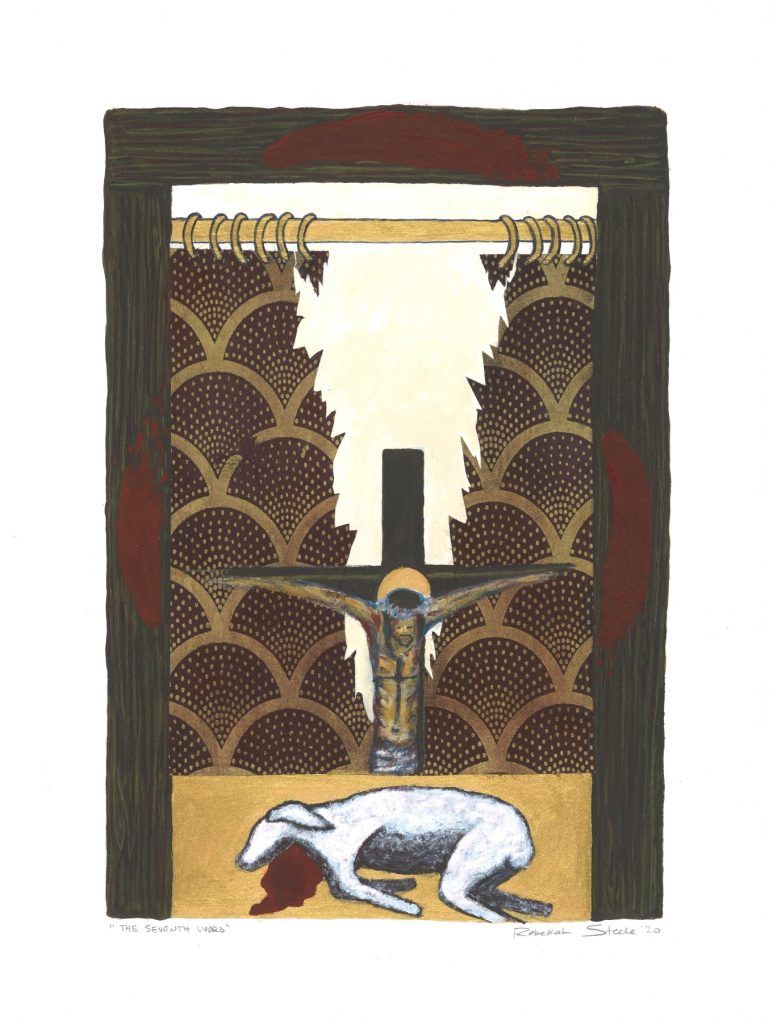 Luke 23:46  There was darkness over the whole land, while the sun’s light failed; and the curtain of the temple was torn in two.  Then Jesus, crying with a loud voice, said, “Father, into your hands I commend my spirit.”

We enter this picture through a door frame, a frame that has the blood of a Passover lamb brushed on the door posts and lintel with a hyssop branch (Exodus 12).  This Passover lamb was killed and its blood placed on the door posts so that the spirit of death would pass-over the house, just as we who believe in Jesus have the blood of Jesus on our hearts to ensure that death will also pass-over us.

In this final act as Jesus gives up his spirit, Jesus’ physical body slowly starts to fade as shown by Jesus’ arms and the wood of the crossbeam.  Jesus simply and beautifully trusts God not only with all the work that he has done, but even more so, now entrusts him with his very spirit.   The final sacrifice has been made, we are washed clean by the blood of Jesus and forever welcomed into his presence!

For the glory of God!