Good Friday is a special day in the church calendar when we focus on the hours leading up to Jesus death on a cross outside Jerusalem around 2000 years ago. A helpful way churches do this is by looking at seven passages of scripture describing that day and what Jesus said, the seven last words of Jesus. These are deep and emotive words from the most significant day in world history.

To help us reflect more deeply on these words and their significance, artist and church member Meredith Free created seven works of art  that express how these words of Jesus impact her. We hope that these images and reflections are able to guide your worship this Easter season. 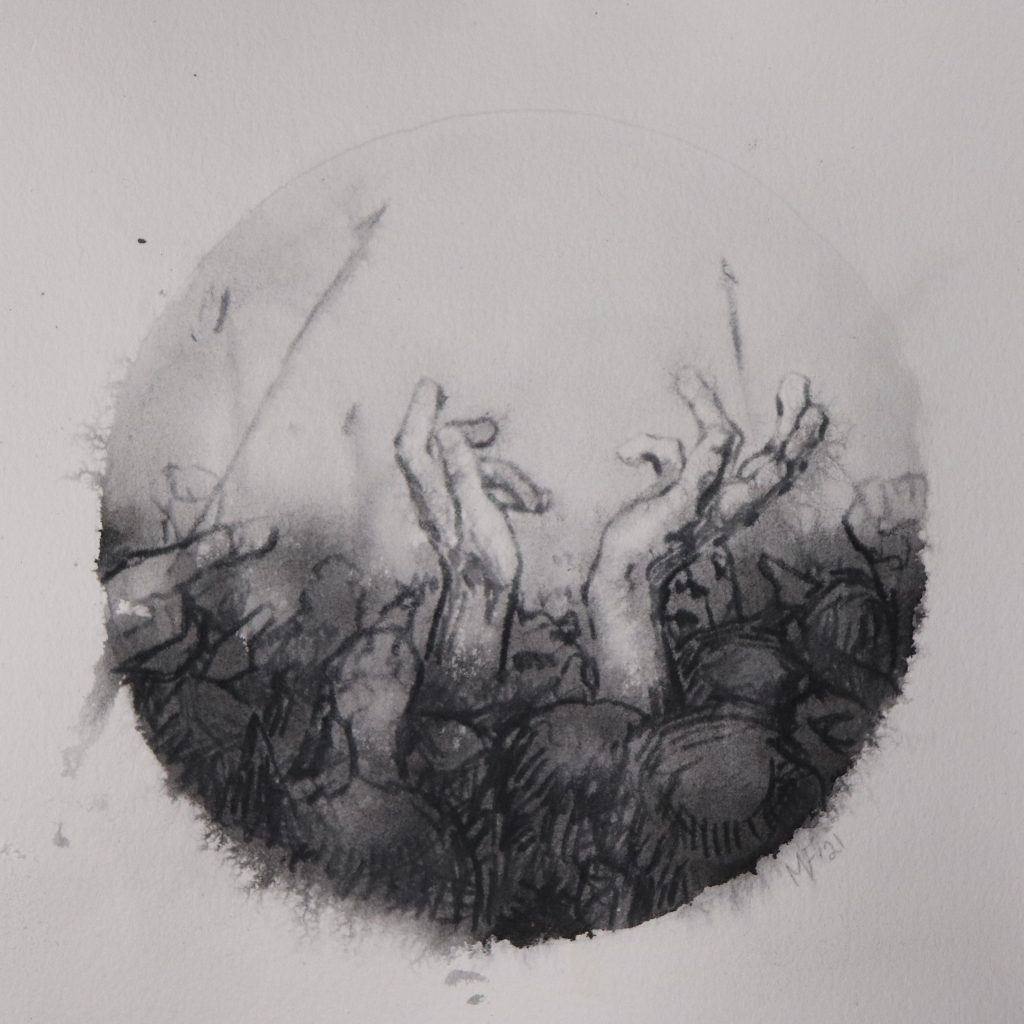 Father, forgive them, for they know not
This Lent, I worked on a series of paintings on the 7 last words of Christ. This was not the task I would have chosen for myself – some part of me felt that I was not ready to tackle such a series. My church reached out and asked if I would make pieces for their Good Friday service, and I decided to give it a go. What a difference audience makes! It was no longer my own prowess and success that were the obstacles and goal, just my fellow Christian’s encouragement in the mystical event of Christ’s death – as it always should have been. Christ led me out of my own selfish ignorance, even as he forgave those who killed him. 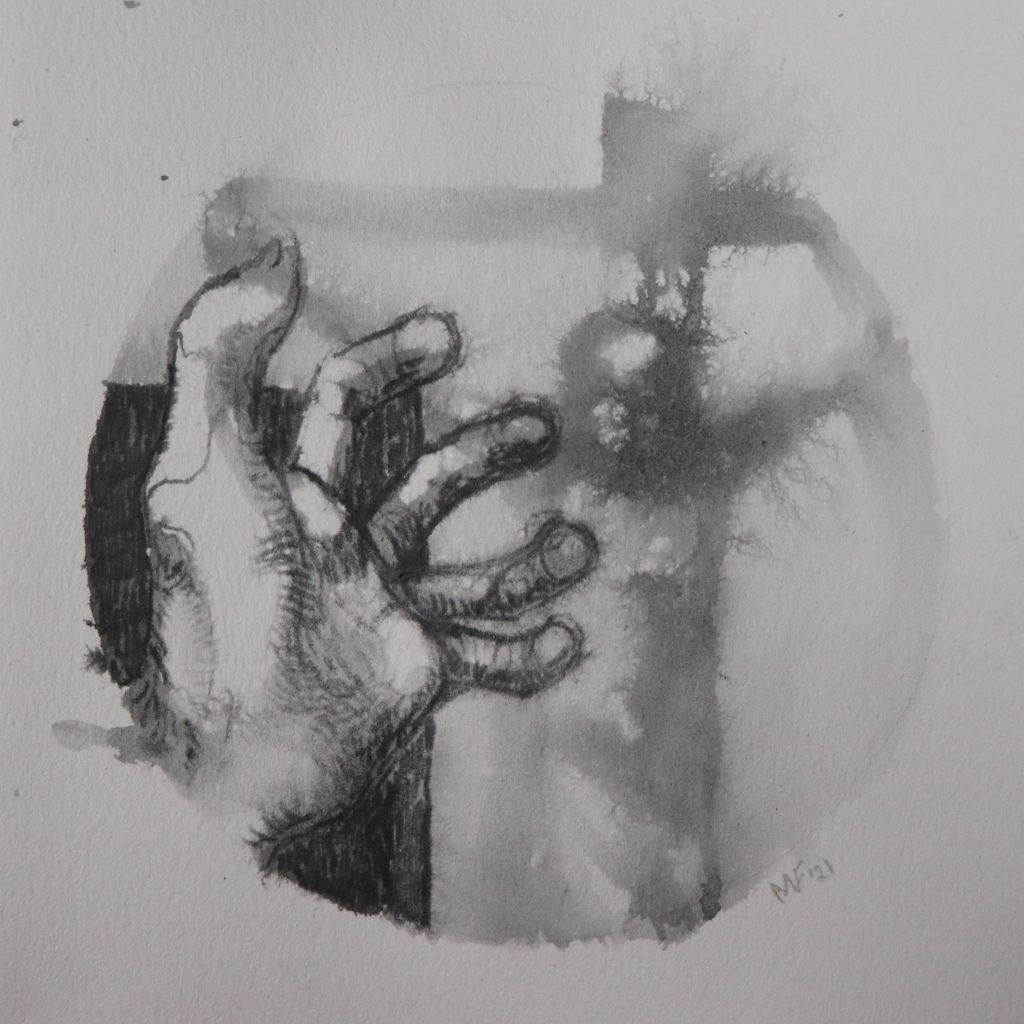 You Will Be With Me In Paradise
I would like to think that if I stood at Golgotha on the day Christ died I would be able to pick him out of the lineup. But I doubt that would be the case. Christ was executed according to Roman law with other men; God identified with humans at their lowest moment, without distinction. While one crucified thief scoffed at him, asking why Jesus did not save himself and them, the other responded “do you not fear God?” Whether this man truly knew that he was defending God himself in that moment, I don’t know enough to say. But part of me believes he did. He looked at the man dying next to him, and saw Jesus, the God-man identifying with him in a such a radical way, that he asked for radical grace “Jesus, remember me when you come into your kingdom.”
In this image I purposefully wanted the identity of the full crucified figure to be ambiguous. Is it Christ being implored by the dying thief? Or is Christ the one reaching out towards the thief who dies next to him, even as Christ dies for him? 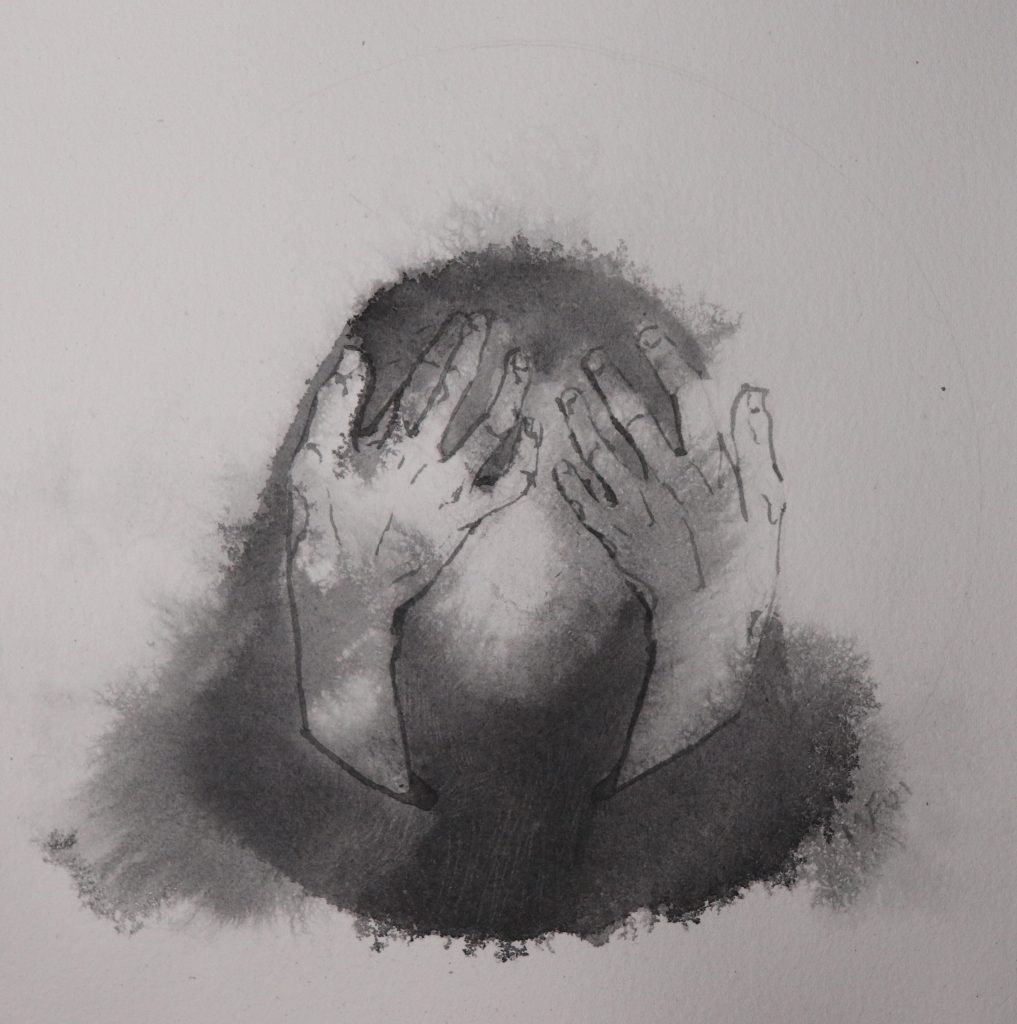 Dear Woman, Here is Your Son
Traditional Japanese sumi ink doesn’t come in a bottle. It comes in a stick of compressed ash. The stick is then dipped in water and rubbed on an ink stone in small circles. The ink pools in a divet in the stone, sending up a fragrant aroma like cedar and cologne… To get a few ounces of pure black ink takes hours. The ink takes on the appearance of blood when it has reached its highest concentration. Painting with the amazing media is like having a conversation (audio on to hear the sound the ink stick makes on the stone!) — there is no making demands of the ink, just acting and reacting. Patiently, meditatively swirling the stick against the stone. Overworking, forcing, controlling were simply not options. Thankful to Makoto Fujimura for teaching me the character of this media, and not just the mechanics.
The physical process of making these pieces reflected the spiritual process. Working with actual ash, I patiently sought after, argued with, and was guided by the Spirit, “blowing where it wishes,” into these shadowy forms of grief, sacrifice, and grace. 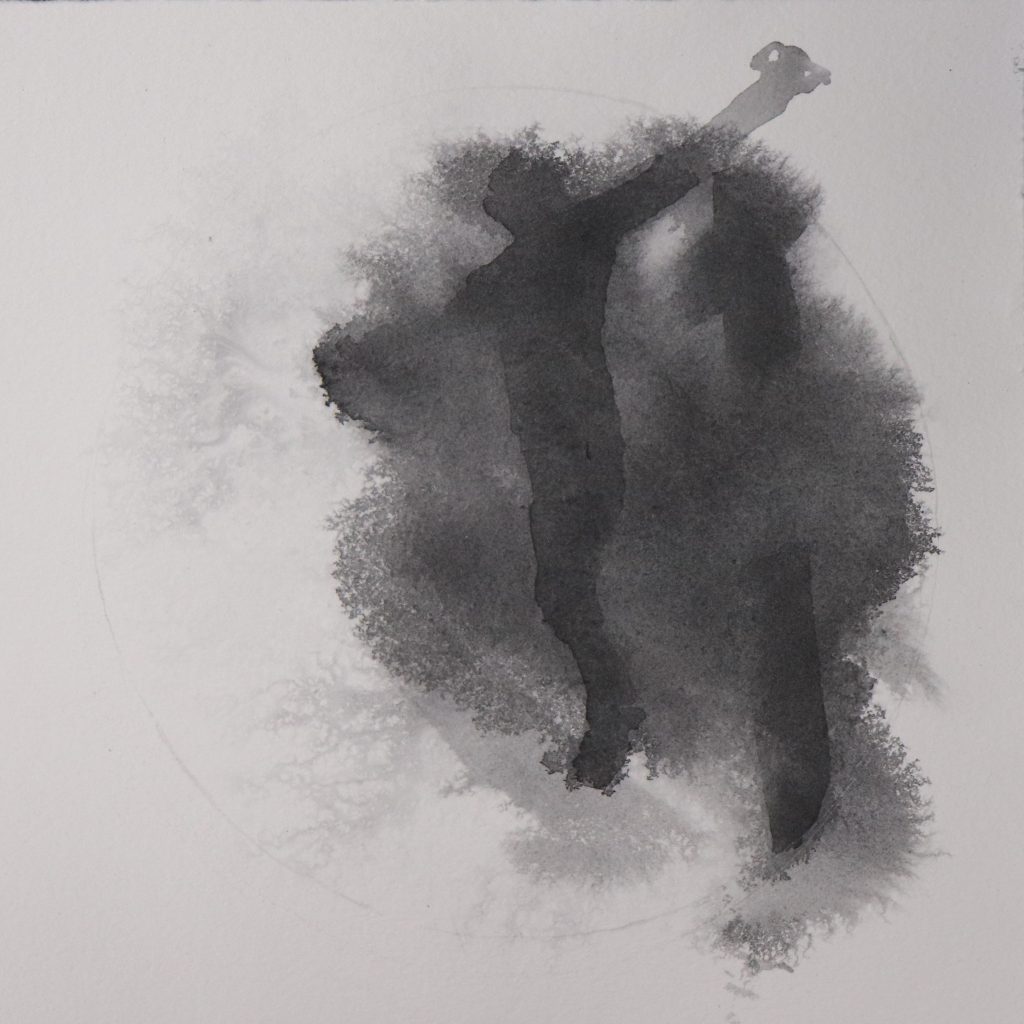 Eli, Eli, Lama Sabachthani
The cry of one abandoned. This image is darker, and more brutal than the rest. There is a sense of the ink being sucked into Jesus, as he is pulled inside death’s grip and out of the hand of the Father. God abandoned God, and God died — illogical, foolish even, yet inexplicably glorious. It is the mystery of the Gospel. When Jesus cried the opening line to Psalm 22 he evoked the entire Psalm. The psalm moves from deep despair, “my God, my God, why have you forsaken me?” To entrapment: “A company of evildoers encircles me; they have pierced my hands and feet.” To a sudden victory in which the afflicted of every nation “shall eat and be satisfied; all those who seek him shall praise the Lord! May your hearts live forever!” In Christ’s anguished cry is hidden the hope which held him firm — that the hearts of “a people yet unborn” may live forever. 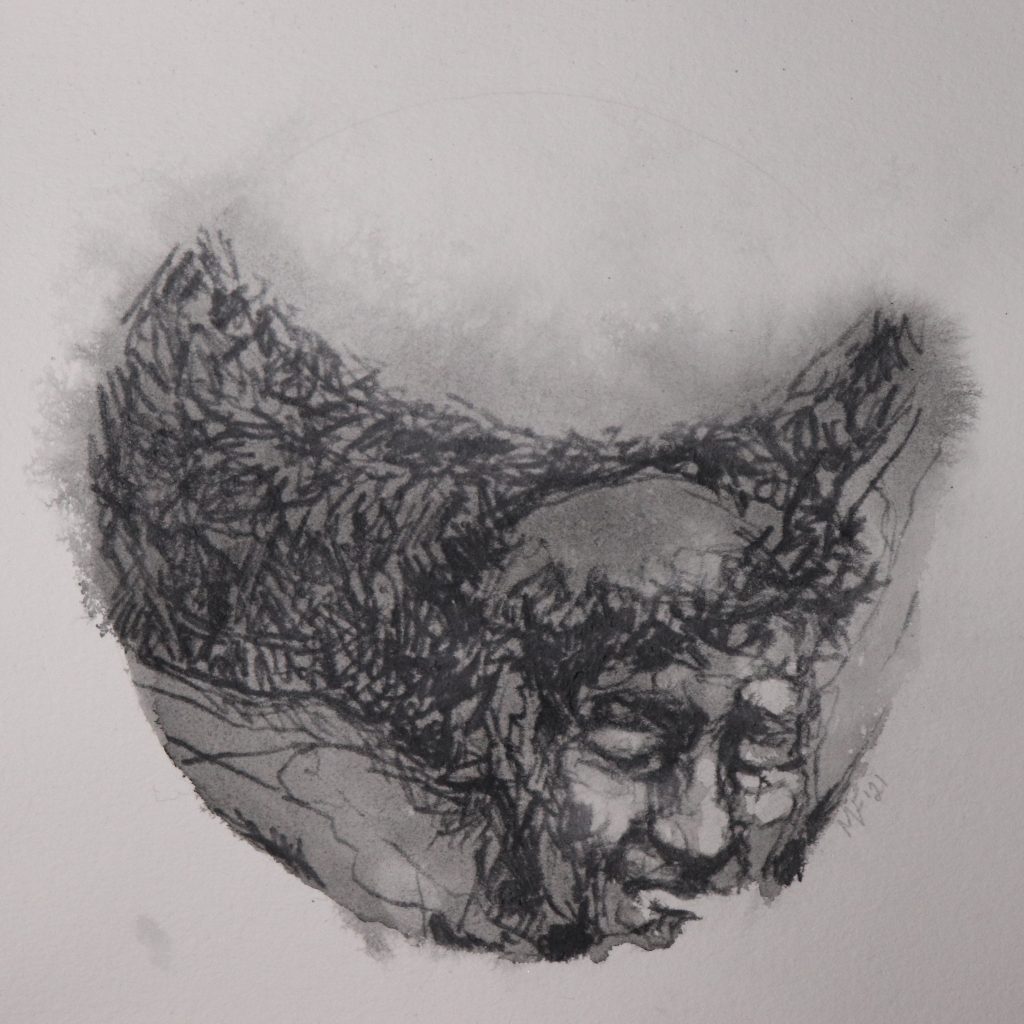 I Thirst
While at first sight a side comment, this forth word of Jesus is spoken “to fulfil the Scripture.” It was an admission of Christ’s ultimate need and desolation at the cross — the man who called himself “the water of life,” and turned water into wine, is thirsty. The Son of God, who dwelled with God in the eternal movement of love, renounces his privilege (yes, privilege) and takes on the elemental neediness and suffering of humankind. He who was “The Life,” is drained of life, even as it floods outwards towards us. And we, oppressed by our human needs and brokenness, are set free, even as Christ bears their load. This image depicts this fullness of brokenness weighing down on Christ, and the humanness of the suffering he endured.

“I am poured out like water,
And all my bones are out of joint;
My heart is like wax;
It is melted within my breast;
My strength is dried up like a potsherd,
And my tongue sticks to my jaws;
You lay me in the dust of death.”
Psalm 22: 14-15 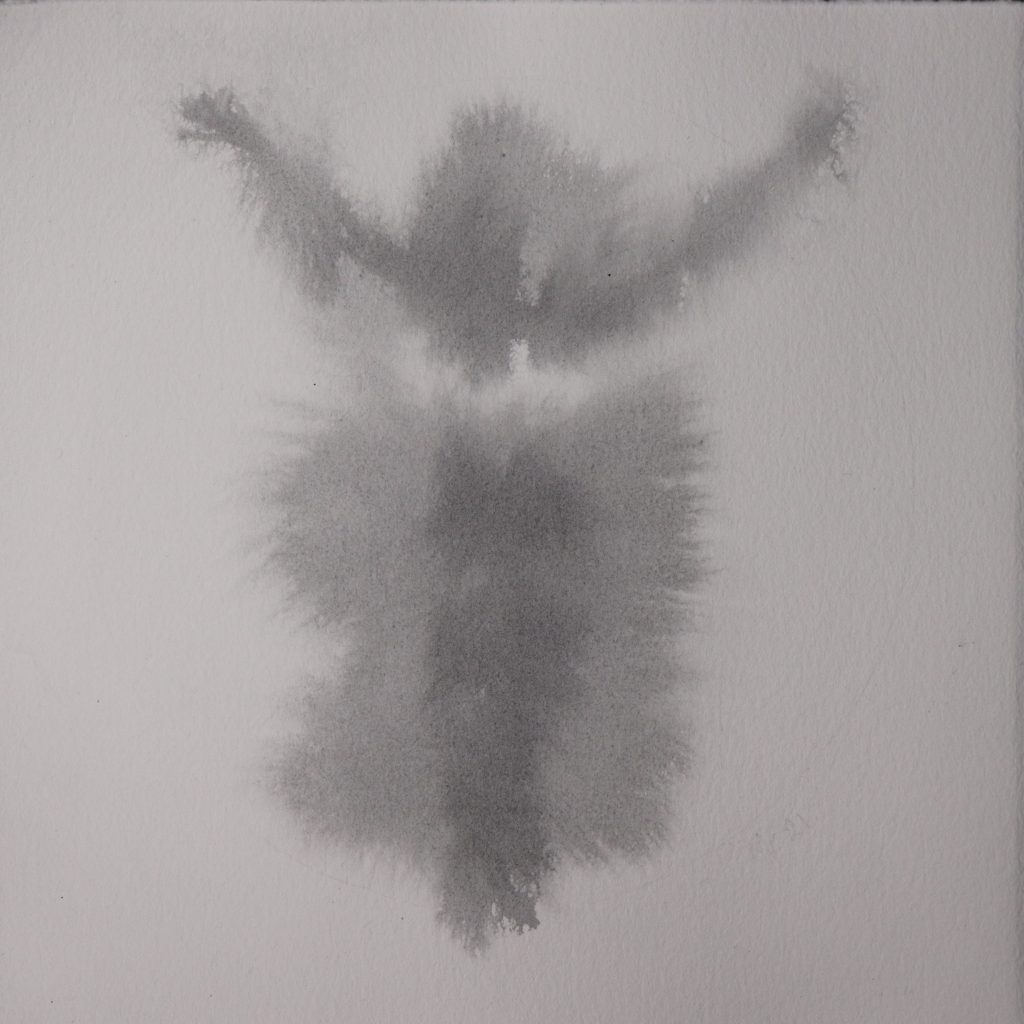 It is Finished
This word is the one I have connected with most this Lent season. I’ve struggled deeply this year with achieving my idea of “success.” In life, in my job as an art teacher, but mostly in my art practice. I’ve felt this need, since I was a teen, to achieve *something* big. Part of it was a holy vocation, persistently pushing myself to pursue God’s purpose for my art. But part of it turned sour, becoming something that I needed to prove my worth and value — to prove the naysayers wrong, to prove to myself, even to prove to God I could do something for him. The moment I come to Christ and say “I have,” the Gospel has slipped from my grasp; the Gospel compels me to bring nothing. Christ “finished” my work for worth and success, and calls me to rest and joyfully create. All the longings I have had for my art practice have been, are being, and will be finished in himself. What do you need to speak this word over today? 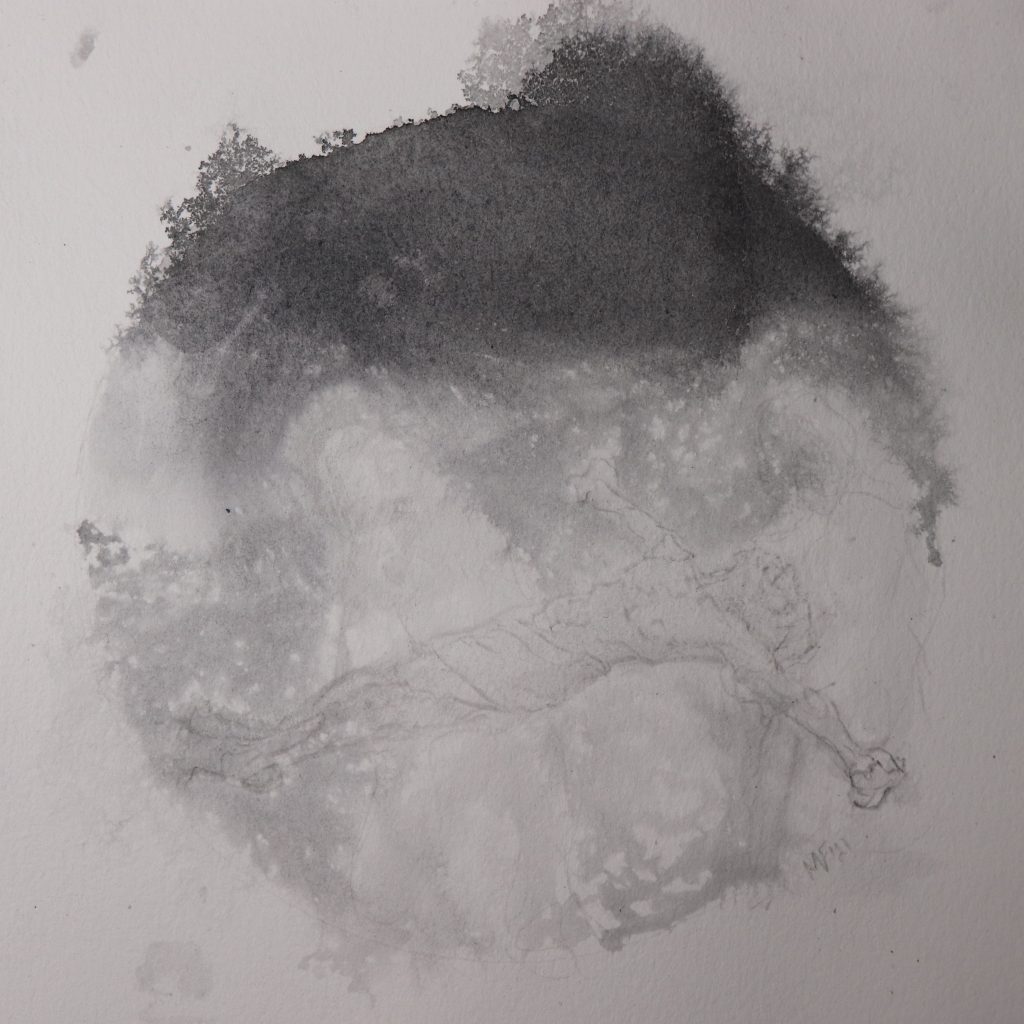 Father, Into Your Hands I Commit My Spirit
Most scenes of Christ’s descent from the Cross show his body as a limp rag doll (look up Van Dych, Raphael, and Pontormo for an idea). This is just not how a body behaves post mortem — even by just a few hours. Christ’s body would have stiffened into the cruciform shape he died in, frozen in his experience of agony. Capturing the reality of his bodily death is crucial to understand the import of his final word. Christ could not be fully victorious over death, if he didn’t submit to the full extent of its power. Christ died faster than most do in crucifixion. He was pushed not only to the limit of physical suffering, but physiological and emotional suffering as well. He felt the full weight of humanity’s pain — the pain of abuse, grief, and oppression which many experience today. In committing his spirit to the Father, Christ was giving in to the full burden of physical death — the death that haunts our steps every day. “We don’t have a priest who is out of touch with our reality. He’s been through weakness and testing, experienced it all—all but the sin. So let’s walk right up to him and get what he is so ready to give. Take the mercy, accept the help” Hebrews 4:14-16 MSG